China reforms ‘one child policy’- What does this mean for NI?

Hot on the heels of President Xi Jinping’s historic UK state visit, (during which a range of significant trade and investment partnerships between the two countries were unveiled), the Chinese government has announced the relaxation of its infamous one-child policy.

Introduced in 1979 in an attempt to reign in population growth, the policy is estimated to have prevented circa 400 million births.  Proponents of the policy claim that this population restraint reduced the domestic drain on resources and therefore laid the foundations for China’s remarkable economic success of the 2000s.  Critics, however, point to the shifting demographics in China, with an increasingly ageing population forcing the government to divert resources to a hitherto underfunded health and social care system. 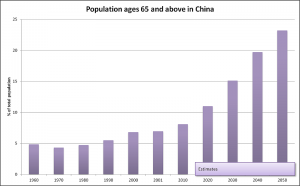 A potential catalyst for the policy reversal could well have been the 2012 OECD Economic Policy Paper No.3, which forecast (by dint of its rapidly ageing population) that by 2020 China will be overtaken by India and Indonesia as the most rapidly growing non-OECD economy.

The news of this policy shift may, at first glance, appear to be of little consequence to Northern Ireland, but it is worth noting that our manufacturing exports to China have increased by 58% over the past four years. The Chinese market is and will continue to be a key source of economic growth in NI and the long-term impact of an increasing working age population in China should provide a further stimulus to exports.

Throughout 2015, there has been increasing international focus on the state of the Chinese economy and the stock market crash of June-July, during which the Shanghai stock market lost 30% of its value. This added additional weight to the argument that China’s claimed GDP figures have been exaggerated in order to bolster domestic confidence in the economy. For Q2 2015, the official estimate of China’s GDP growth rate was 7%, compared to the 4% put forward by Citigroup.  However, even if the official figures are wildly overstated, the consensus appears to be that China’s economy is still growing significantly faster than the USA, Japan and any member country of the EU.

This strong underlying growth rate, coupled with the long-term benefits of the cessation of the one-child policy, will likely lead to a further increase in China’s middle class and accelerate demand for UK products and services.

In terms of interest rates, in September, the US Federal Reserve opted to hold interest rates at near zero, citing the economic uncertainty in China at the time.  With the People’s Bank of China cutting rates last week in order to provide a further stimulus to the economy, it now looks increasingly likely that the Fed may increase interest rates over the next few months.   Given that key economic barometers such an unemployment rates and GDP growth are very similar on both sides of the Atlantic, it would not be at all surprising to see the MPC following the Fed’s lead and increasing rates in an attempt to fend off potential inflationary pressures.