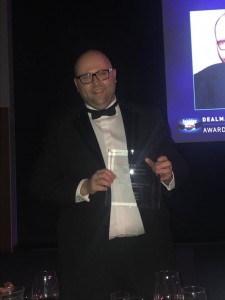 Gavin Early, Associate Director at HNH Group, has been named Young Dealmaker of the Year at the Insider Northern Ireland Dealmakers Awards 2018.

Gavin picked up his award in front of a packed room at last night’s prestigious event in Belfast Waterfront.

Gavin was recognised due to his involvement in a number of notable deals in 2017, not least the acquisition of Hi Power by Flowtech and the raising of £1m growth capital for Belfast company ISL Waste Management.

Insider commented on his win saying: “The judges were impressed with his proven track record of delivering complex deals, as well as his growing reputation as one of the most senior and experienced young dealmakers in Northern Ireland.”

Richard Moorehead, HNH Group Director said: “We were delighted to see Gavin win such a prestigious award and proud that it came so quickly after the HNH Group being named leading corporate finance adviser in Northern Ireland in the Experian Deal and Advisors League Table 2017.

“These achievements are testament to the hard work and professionalism of our team and recognition of the strategic advice given to local businesses to complete landmark deals.”