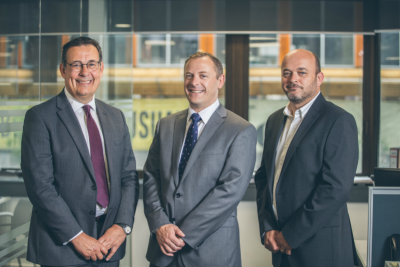 We are delighted to announce the opening of an office in Edinburgh.

Announcing the opening, Craig Holmes said “We can now build on the great foundation we have established in Belfast since our opening in 2011 and extend our offering and influence to Scotland.  We have made this move with the full support and encouragement of our existing clients and business partners who all welcome this geographic extension of our services”.

Two experienced deal advisory Directors have now joined us in Scotland – Harry Linklater and Bruce Walker.  Both have operated exclusively in the Scottish deals market for the past twenty years and bring with them a depth of experience and relevant networks.

Two further Directors have been recruited and they will join Harry and Bruce in Scotland when they are permitted to do so under their transitional arrangements.

Harry Linklater said of the opportunity “Having developed client relationships over time with a focus on the Scottish SME sector, the opportunity to continue working with long established contacts within a progressive advisory focused firm such as HNH is greatly anticipated. As we build our presence in Scotland as HNH, we will aim to leverage the firm’s proven activity levels with equity and debt funders across various locations, which we hope offers the Scottish market something new and different”.

Bruce Walker who joins after 25 years with KPMG says “I am extremely excited to be joining the HNH Group and getting in at the start of building their business in Scotland and beyond.  HNH has a strong reputation in Northern Ireland and a long list of completed M&A transactions.  I look forward to working with the award-winning Belfast team and building a sustainable business in Scotland.  My focus will be M&A and Debt Advisory”.

Initially HNH Scotland will focus on M&A, Debt and Transaction Services where they will work very closely with the existing HNH teams.

HNH Scotland will also have access to the Business Restructuring, Tax Advisory, Forensic and Human Capital teams that operate from Belfast.