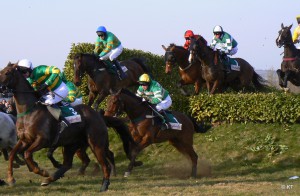 What a sporting week we have just had for the Irish. Cheltenham, as ever, has been fantastic. In horseracing corners rumours are awash that the Brexit vote was an attempt to keep the Irish raiders out of the famous March meet.

With 17 winners, leading training and leading jockey the Irish are continuing the tradition of doing the double each year since 2013 and just yesterday we saw a rejuvenated Rory McIlroy win at the Arnold Palmer International.

However, this week will be remembered for Ireland rugby completing their third and most comprehensive grand slam.

In business, we always hear people talking about their 5-year plan and how that could be delivered. A strategic plan based on where you want to be in a visible timeframe and an operational plan to deliver those strategic goals is key.

Many rugby fans like me will recall the awful day in October 2015 when in the quarter final of the rugby world cup in Cardiff, an injury ravaged Ireland were blown away by Argentina and our dreams were shattered. With Sexton, O’Connell, O’Brien, Payne, O’Mahony out of the game and Bowe injured early, a weakened Ireland team just had not the answer.

Whilst I follow rugby, I am no expert but as a regular at Ravenhill and the Aviva, the last couple of years in Irish rugby has been fascinating. Joe Schmidt, his back-room team and Irish rugby in general has obviously put so much effort in over the last number of years to deliver the strategic plan of grand slams and world cup goals in 2019. The operational plan being creating a pool of players in each position, along with a new exciting fast style of play that can defeat the All Blacks…that goal being accomplished!

The one move yesterday that epitomised the success of the operational plan was the Tadhg Furlong role in the set piece leading to the CJ Stander try. The vision of Schmidt, the coaching of the move and the implementation by the team is as what captain Rory Best said in one of his post-match interviews is a result of repeated practice, hard work and teamwork.

Rugby is now a professional business and what an advert for Irish sporting and business successes Joe Schmidt, Rory Best and the squad (and wider squad and staff are) are. Roll on the 2019 world cup in Japan.

The island of Ireland, North and South, has so many examples of successful entrepreneurs, companies, sportsmen and women and teams competing at the highest level in their chosen industries or sports and last week was a fantastic example in the business of sport.

As I get ready for this week in work I am already thinking of what I can do within my role in the team I work in to make us compete better in our environment. I need look no further than the hard work of the jockeys and trainers at Cheltenham or Rory and his team at Twickenham for motivation of what you can do with a plan and preparation.