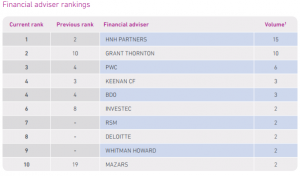 HNH has been confirmed as the leading corporate finance adviser in the Northern Ireland market. They advised on 18 successful transactions during 2017, 15 of which met Experian’s criteria for inclusion in the published league tables. (Experian UK and RoI M&A Review 2017).

In 2016 we reported what was then a record performance of 14 completed deals and, subsequently, were named Corporate Finance Team of the Year at the Insider Dealmakers Awards. Indeed, 2016 in general was a bumper year for M&A in Northern Ireland with 235 deals in total – the highest on record.

Moving into 2017, many column inches were dedicated to the potential impact of Brexit and the Stormont impasse. The general sentiment was that 2017 was going to be a difficult year for Northern Irish businesses. Our experience and indeed the overall state of the M&A market in NI, suggests that this pessimism was misplaced. We have had a busier year than ever, advising on a wide range of transactions from company sales to private equity investments. With a strong pipeline of deals heading into 2018, we have invested further in our Corporate Finance team, taking the total headcount to seven lead advisory professionals.

We would like to take this opportunity to thank all of our clients for their continued support.